I officially retired from the party scene in 2006 – after almost 20 years of partying and more than a decade of covering entertainment as a reporter. Considering my now ripe old mid 30’s age, some might say that I retired young. Those who knew me in my prime party days growing up in Barbados knew that I was in the dub (Reggae/Dancehall party) from as early as 14 years and in the Calypso tents and nightclubs from a couple years after. My “Uncle Mac” – Mac Fingall, one of the Caribbean’s top emcees, introduced me to the calypso tents and for many years took me to countless performances during our annual carnival known as Crop Over Festival. Even before then, I was already a fan of Calypso and its “offspring” Soca  music.

For those unfamiliar with a Calypso tent, it’s a sit-down, concert-type setting featuring singers, or rather calypsonians backed by a full line up of musicians performing songs that tell stories primarily of social issues. Among the key elements of stellar calypso are: sweet/catchy melodies; crafty lyrics (often with emphasis on wit; double entendre, satire, etc); eloquent rendition/phrasing and scintillating presentation (props, costumes, sound effects etc). While much Calypso is designed for a listening/watching audience, many songs are also created to get people dancing; what we West Indians call, “winding,” “wining,” “wukkin’ up,” or “wucking up.” Calypso/Soca is infectious; it’s hard to hear these pulsating rhythms and not want to move. In every Caribbean island that boasts a carnival, Calypso is the magic that sparks the excitement. So much so, that thousands of patrons throng stadiums across the region to watch calypsonians compete for coveted titles of Calypso King/Queen or Soca Monarch.  Calypsonians “crowned” are usually awarded prizes of thousands of dollars and motor vehicles. It is Calypso that also ignites the frenzy as revelers gyrate in Mardi Gras-style costumes and masquerade on the streets during our carnivals.

Me with Edwin “The General” Yearwood of the band Krosfyah from Barbados.

I love everything about and around Calypso/Soca, a love cemented during those years of “schooling” with Uncle Mac. So when I became a reporter and was first sent to cover a calypso tent, despite some nervousness, the assignment was a dream. I went on to write my own Crop Over column at the Barbados Advocate newspaper and established a wide range of sources, not just from within the calypso arena, but across the wider entertainment circuit. When I moved on to work at The Nation (Barbados) newspaper, my contacts expanded beyond local shores and across the islands, in particular Trinidad and Tobago – the birthplace of Calypso/Soca. There, I made great connections with the directors of Calypso Spektakula, then known for hosting some of the region’s biggest Calypso shows/parties and greatest calypsonians. This ultimately led me to review many of their events from The Mighty Sparrow in concert and annual parties in Barbados to shows in Antigua, St. Lucia and Trinidad. It also afforded me the chance to be on the road with top Soca artists such as Edwin Yearwood and Krosfyah, Alison Hinds and Square One, Machel Montano and his then band Xtatik, Red Plastic Bag, Rupee, David Rudder, Iwer George, Super Blue, Ronnie McIntosh, Denise Belfon, and more. I was also privileged to often see perform and write extensively about a true maestro in Calypso, Anthony “The Mighty Gabby” Carter. Overall, this lifestyle allowed me to enjoy the best of carnivals and Soca parties in the Caribbean, where until I moved to New York, I had never missed Barbados’ Crop Over and had in some way participated in Trinidad’s Carnival, annually for almost a decade.

Apart from the carnivals and Soca parties, I was still partying – almost nightly. My friends and I made it a ritual to go and support our local bands Krosfyah, Square One, Coalishun (which featured Rupee) and any other artist with a regular gig on our nightclub/party scene. In particular, I hardly missed a performance by Krosfyah, as one of its founder members, Anthony “Rebel” Bailey is one of my dearest friends. Plus, at different points in the band’s history, other friends of mine were members. Some members of Square One were also my friends, so I always felt a special loyalty to that group as well. In fact, perhaps because the island is so small, or due to forming so many friendships out of covering entertainment, I felt a certain allegiance to our artists. So even when I wasn’t reviewing their performances as a reporter – which I managed to do  in a “fair” manner – I was still attending their gigs as a “fan.”

While their repertoire focused on Caribbean rhythms, these artists also occasionally performed other genres to complete the party experience. But ultimately they were and are all Calypso/Soca ambassadors. I watched over the years as many of them  “grew” from drawing  just a small room of local partygoers to commanding regional and even international venues with tens of thousands of patrons. I remember being there as my then friend, college mate and colleague from our first job, Rupert Clarke won a local talent competition and then took the Soca world by storm as Rupee with his hits “Jump” and “Tempted To Touch.” I can recall every member that replaced another in Krosfyah, leaving now only two founder members on stage with others now managing the band. At the same time, I noticed that throughout its 19 years, before becoming defunct in 2005, Square One practically remained unchanged, except for adding a percussionist/steelpan player/keyboardist in the early ’90s.

I watched. I partied. I wrote. The scene pretty much became my life. Many nights after leaving a 10-12 shift in the newsroom and in the field reporting, I would go home, shower and hit the party. Most of the time on arriving to work the next day, I was doing so on about four hours sleep. This went on for most of my journalistic career – even when I simultaneously covered other beats like sports, breaking news or business. Over time, every party seemed the same. I could often predict the order of songs the artist would perform and even the crowd’s response. Still, I never stopped loving the music or the party. I never stopped loving or following the artists. But I was getting tired of the lifestyle. My exit from the scene came with my decision to leave my job and country and move to the U.S. to further my education. For the first time in my life, I was going be away from the regular performances of the artists whose sweet music was like blood pumping through my veins.

As much as I thought I’d grown tired of the scene, my first year in New York missing Trinidad Carnival found me in tears on Carnival Monday. And Carnival Tuesday. It was even more agonizing missing my first Crop Over. But as the second year, third and so on went by, I got used to being away from the scene. I wouldn’t even attend performances when the artists occasionally came to New York. But I followed and still bought their music and a couple of years ago when I was in Barbados for the Christmas holidays, Rebel ensured that I went to watch Krosfyah on New Year’s Eve. The feeling I got that night was rekindled this past weekend. Last Friday night, despite my protests that I’m no longer on that scene, my friend Shanna took me to Brass Fest at the Brooklyn Museum. It’s one of the annual events over the Labor Day weekend hosted by the West Indian American Day Carnival Association  to celebrate Caribbean heritage. Shanna and I were joined by several other Caribbean friends and as is tradition at such parties, we wore our national colors or carried our country flags. 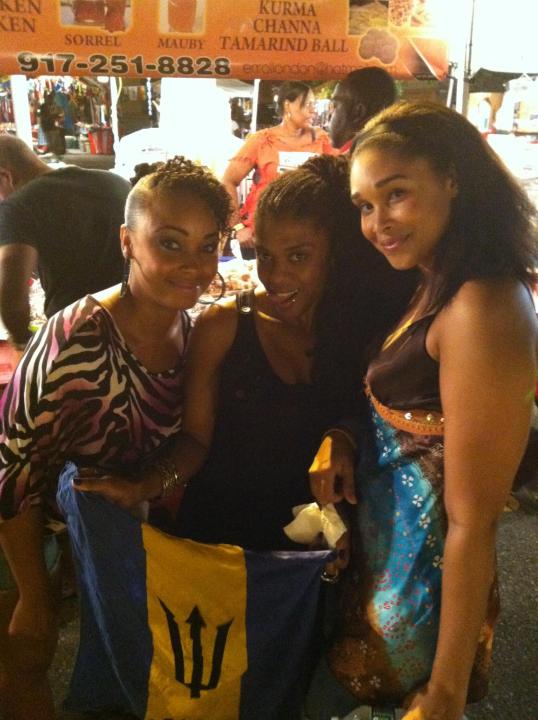 Me, Shanna and Kautre at Brass Fest, Brooklyn Museum.

Some of the big names from my past were scheduled to be on stage. I found myself getting excited to see the energetic performances of Machel Montano and his band HD, featuring my friend Dwain Antrobus on keyboards. As a huge Reggae head, I was stoked to see Mr. Vegas, whose recently released album “Sweet Jamaica” has been on repeat on my iPod for much of this summer. Above all, I couldn’t wait to see my Krosfyah with upfront vocalists Edwin “The General” Yearwood and Khiomal Nurse, and my Rebel on guitar. As we entered the Brooklyn Museum, it appeared that an artist had just been introduced. We missed the announcement and the stage was not yet in view. The music was barely starting up, the song not recognizable and no vocals heard yet. But I know that “sound” and Rebel’s distinctive guitar strumming any day. I said to Shanna, “Krosfyah is on stage.”

For the next few hours in sheer abandonment, I allowed myself to party – for the first time in six years! The haunting melodies of Krosfyah, that Soca music – such food for my soul – had me jamming, waving, wining, jumping. It totally took control. Edwin Yearwood puts it best in one of his songs (see video below): “Anytime I hear sweet Soca pumping, feels like I’m home again.”

To the Creator and to the artists, I say, thanks for this undisputed sweet Calypso/Soca music.